A database of photos taken between 1886 and 2019 reveals that the size of rhinoceros horns has gradually decreased in five species, most likely due to poaching. 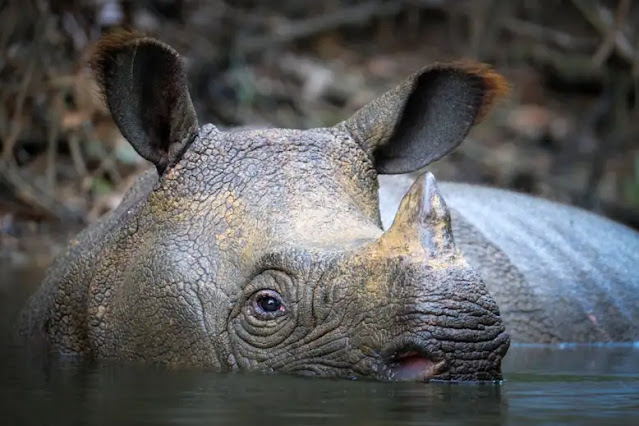 Rhinoceros horns appear to have shrunk significantly over the last 130 years, most likely due to poaching.

Hunters kill rhinos for their horns, which are used as trophies or as high-value commodities in traditional Chinese and Vietnamese medicines and materials. The culling of rhinos with the largest horns, which are the most valuable, may have aided the survival and reproduction of smaller-horned rhinos, according to Oscar Wilson of the University of Helsinki in Finland, who conducted an analysis of photographs dating back more than a century.

"Obviously, this is bad news for hunters, but it's also bad news for rhinos, because if hunters want the same amount of horn, they'll have to shoot more rhinos," he says.

Because rhino horns are so valuable, even museum specimens are tightly guarded and difficult to access for research. So Wilson and his colleagues examined 80 profile-view photographs of living rhinos from 1886 to 2019, which rhino experts from around the world had uploaded to the Rhino Resource Center's database near Cambridge, UK.

The researchers used image software to calculate various anatomical measurements for each animal before estimating its horn size in relation to its body size. Because horn size varies greatly between rhino species, the team created separate size charts for each of the five rhinoceros depicted in the photos: the white rhino (Ceratotherium simum), Indian rhino (Rhinoceros unicornis), Javan rhino (Rhinoceros sondaicus), Sumatran rhino (Dicerorhinus sumatrensis), and black rhino (Diceros bicornis), the last three of which are critically endangered.

The majority of the rhinos photographed were born in the wild but were living in zoos, wildlife parks, or sanctuaries at the time of the photos, while 12 were still in the wild.

When the researchers plotted the horn sizes against time, they discovered that they had gradually decreased within each species. While the data is insufficient to provide precise percentages of horn size changes, Wilson notes that the downward trend is overall and most pronounced in Sumatran rhinos.

He believes that poaching pressure to reduce horn size may have a negative impact on rhino behavior and welfare. "Rhinos do use their horns for a variety of purposes, such as defending their territory or finding a mate," Wilson explains. "We believe [the reductions in horn size] must have an impact on how rhinos live their lives."

Nonetheless, he claims that the researchers' findings "are not all doom and gloom." The researchers also examined thousands of other images in the database, including artistic depictions, which indicate a gradual improvement in people's attitudes toward rhinos over the centuries. "We're seeing rhinos in a much more positive light than we ever have," Wilson says. "We believe this is genuine cause for optimism in rhino conservation."