A new owl species has been discovered in Africa's Principe Island's rainforests.

The new owl species was described in the open-access journal ZooKeys based on morphology, plumage color and pattern, vocalizations, and genetics. An international team led by Martim Melo (CIBIO and the Natural History and Science Museum of the University of Porto), Bárbara Freitas (CIBIO and the Spanish National Museum of Natural Sciences), and Angelica Crottini gathered and processed the data (CIBIO).

The bird is now known as the Principe Scops-Owl, also known as Otus bikegila.

"Otus" is the generic name for a group of small owls with a shared history, also known as scops-owls. They are found in Eurasia and Africa and include widespread species such as the Eurasian Scops-Owl (Otus scops) and the African Scops-Owl (Otus nigricans) (Otus senegalensis).

The scientists behind the discovery go on to say that the species name "bikegila" was chosen in honor of Ceciliano do Bom Jesus, also known as Bikegila, a former parrot harvester from Prncipe Island who is now a ranger in the island's natural park.

"The discovery of the Principe Scops-Owl was only possible because of Bikegila's local knowledge and his unwavering efforts to solve this long-standing mystery," the researchers write. "As such, the name is also intended to recognize all locally-based field assistants who are critical in advancing knowledge of the world's biodiversity."

In the wild, the most obvious way to identify one would be through its distinct call—in fact, it was one of the main clues leading to its discovery.

"The call of Otus bikegila is a short 'tuu' note that is repeated at a fast rate of about one note per second, similar to insect calls. It is frequently heard in duets, almost as soon as night falls "Martim Melo elaborates.

To determine the distribution and population size of the new species, the entire Principe Island was extensively surveyed. The findings, published in the journal Bird Conservation International, show that the Principe Scops-Owl can only be found in the island's remaining old-growth native forest in the uninhabited southern part of the island. It occupies an area of about 15 km2 there, owing to a preference for lower elevations. The owl densities are relatively high in this small area (about four times the size of Central Park), with a population estimated at 1000-1500 individuals. 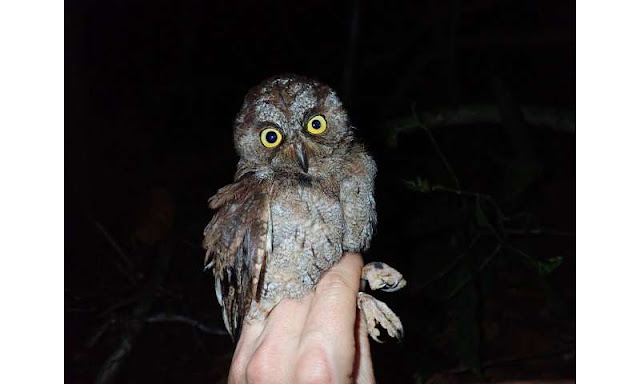 Despite this, researchers have proposed that the species be classified as "Critically Endangered," the highest threat level on the IUCN Red List, because all individuals of the species occur in this single and very small location (of which a portion will be affected in the near future by the construction of a small hydro-electric dam). The International Union for Conservation of Nature must still assess this recommendation. 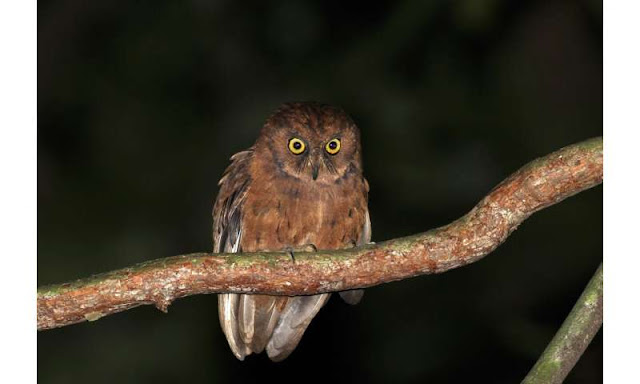 Monitoring the population will be necessary to obtain more accurate estimates of its size and to track its trends. A survey protocol based on the deployment of automatic recording units and AI to retrieve data from these has been designed and successfully tested for this purpose. 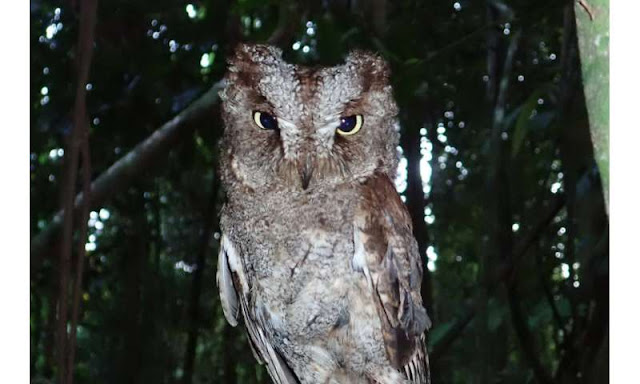 "The discovery of a new species that is immediately assessed as highly threatened exemplifies the current biodiversity crisis," the researchers write. "On a positive note, the Principe Scops-occurrence Owl's area is fully included within the Principe Obô Natural Park, which should help secure its protection."

This is the eighth known species of bird endemic to Prncipe, highlighting the unusually high level of bird endemism for this 139-square-kilometer island.

Despite the fact that a new species of scops-owl was recently described from Prncipe, genetic data indicated that the island was likely the first in the Gulf of Guinea to be colonized by a scops-owl.

"Although it may appear unusual for a bird species to remain undiscovered for science for so long on such a small island," the researchers write, "this is by no means an isolated case when it comes to owls." "For example, the Anjouan Scops-Owl was rediscovered on Anjouan Island (also known as Ndzuani) in the Comoro Archipelago in 1992, 106 years after its last observation, and the Flores Scops-Owl was rediscovered in 1994, 98 years after the previous report."

"The discovery of a new bird species is always a cause for celebration and an opportunity to educate the general public about biodiversity," says Martim Melo. "In this age of human-caused extinction," he and his colleagues write in their paper, "a major global effort should be undertaken to document what may soon no longer be."

"Birds are most likely the most researched animal group. As a result, the discovery of a new bird species in the twenty-first century emphasizes both the reality of field-based explorations aimed at describing biodiversity, and how such curiosity-driven endeavors are more likely to succeed when combined with local ecological knowledge, the participation of keen amateur naturalists, and persistence "They continue.

They believe that this "new wave of exploration, conducted by professionals and amateurs alike," will help rekindle the connection to the natural world, which will be critical in reversing the global biodiversity crisis.