Ions influence the structure and dynamics of water on a wide range of lengths and time scales. According to new findings, the water environment of specific pairs of magnesium and sulfate ions has a significant impact on the dynamics of aqueous solutions. 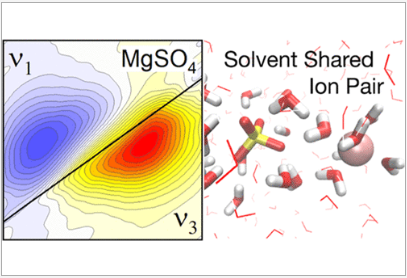 The native medium for biochemical and cellular processes, liquid water, is made up of a complex network of polar molecules linked together by hydrogen bonds. Water changes its local structure in response to the presence of a solute.

The influence of negatively and positively charged ions on liquid water is typically classified using the Hofmeister series, which ranks ions based on their ability to structure or disrupt the water structure around them. Despite many years of research, the microscopic origin and molecular mechanisms of the Hoffmeister series remain controversial. The Hoffmeister series, on the other hand, is extremely important because it characterizes the effect of ions on biomolecules dissolved in water.

Recent experiments and simulations have revealed that ions have a much more complex influence on the dynamics of the water molecules around them. The research, which was published in the journal ACS Physical Chemistry Au, combines spectroscopic experiments with detailed theoretical analyses of molecular interactions and dynamics.

The researchers from Berlin's Max Born Institute, Berlin's Freie Universität, and Munich's Ludwig-Maximilian-Universität used asymmetric stretching vibrations of sulfate (SO42-) ions as locally sensitive probes to map the dynamic properties of the environment.

Hydrated sulfate ions are a prototypical model system in this context because they are commonly found in minerals and are important in physiology and biochemistry. The researchers compared the behavior of sulfate ions in the presence of sodium (Na+) or magnesium (Mg2+) ions at low ion concentrations to obtain information about the local hydration environment using the experimental technique of two-dimensional infrared spectroscopy in the femtosecond time domain. The presence of Mg2+ ions reduces the ultrafast fluctuations of the water shell around a sulfate ion, resulting in a specific slowdown in the solvation dynamics of hydrated MgSO4 solutions compared to aqueous Na2SO4 solutions.

Extensive simulations reveal a molecular picture in which the slowing of water dynamics is caused by structural features of SO42- — Mg2+ ion pairs that share water molecules in their hydration shells. Contrary to popular belief, the described effects are localized and limited to the first 1-2 water layers surrounding the sulfate ion. In contrast to the Hoffmeister series, which classifies the effect of ion types on water structure, the new findings show that individual solvation geometries of specific ion pairs are particularly important for the dynamics of dilute aqueous systems.

Max Born Institute for Nonlinear Optics and Short Pulse Spectroscopy provided the materials (MBI). Please keep in mind that content may be edited for style and length.