A new fossil discovery from Scotland has shed light on the early evolution of lizards during the dinosaur era. 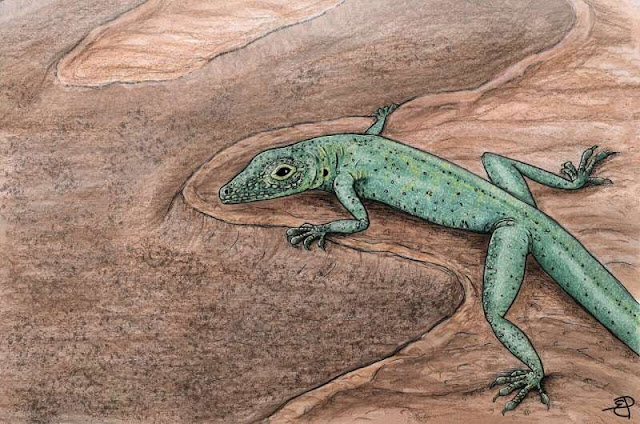 Bellairsia gracilis, a tiny skeleton discovered on the Isle of Skye, is only 6 cm long and dates from the Middle Jurassic period, 166 million years ago. The remarkable new fossil consists of a nearly complete skeleton in life-like articulation, with only the snout and tail missing. This makes it the world's most complete fossil lizard of this age.

Bellairsia's skeleton contains a mix of ancestral and modern features, indicating what the ancestor of today's lizards (which are classified as "squamates") might have looked like.

The findings were published in the journal Nature by researchers from the universities of Warsaw, Oxford, and UCL. According to first author Dr. Mateusz Taanda (University of Warsaw and UCL), "This tiny fossil allows us to witness evolution in action. Working with such complete, well-preserved fossils from a time period about which we know so little is unusual in paleontology."

A team led by Oxford University and National Museums Scotland discovered the fossil in 2016. It's one of several new fossil discoveries from the island, including early amphibians and mammals, that are shedding light on the evolution of important animal groups that live today.

Dr. Taanda stated, "Bellairsia has some modern lizard characteristics, such as cranial kinesis—the movement of the skull bones in relation to one another. This is a critical functional characteristic of many living squamates."

Dr. Elsa Panciroli (Oxford University Museum of Natural History and National Museums Scotland), co-author and fossil discoverer, stated, "It was one of the first fossils I discovered while working on Skye. The small black skull protruded from the pale limestone, but it was so small that I was lucky to notice it. Looking closer, I noticed the tiny teeth and realized I'd discovered something significant, but we didn't realize it until later that almost the entire skeleton was in there."

Squamates, which include lizards and snakes, have over 10,000 species today, making them one of the most species-rich living vertebrate animal groups. They include animals from all over the world, such as snakes, chameleons, and geckos. The group is distinguished by numerous specialized skull and skeleton features.

Although we know that squamates originated 240 million years ago in the Triassic, a lack of Triassic and Jurassic fossils has made tracing their early evolution and anatomy difficult.

Analyzing the new fossil alongside living and extinct fossil squamates confirms Bellairsia's place in the squamate family tree's "stem." This means that it diverged from other lizards shortly before the formation of modern groups. The findings also support the hypothesis that geckos are a very early branching lineage and that the enigmatic fossil Oculudentavis, previously thought to be a dinosaur, is a stem squamate as well.

The team used X-ray computed tomography (CT) to examine the specimen, which, like medical CT, allows for non-invasive 3D imaging. This allowed the researchers to image the entire fossil, despite the fact that most of it are still hidden by the surrounding rock. Unlike medical scanners, which operate on a millimeter scale, the Oxford University CT scanner revealed details as small as a few tens of micrometers.

The European Synchrotron then imaged parts of the skeleton in greater detail, including the skull, hindlimbs, and pelvis (ESRF, Grenoble, France). The intensity of the synchrotron beam allows for a resolution of 4 micrometers, revealing details of the skeleton's smallest bones.

According to co-author Professor Roger Benson (University of Oxford's Department of Earth Sciences), "Fossils like this Bellairsia specimen are extremely valuable in filling gaps in our knowledge of evolution and the history of life on Earth. It was once nearly impossible to study such tiny fossils, but this study demonstrates the power of new techniques, such as CT scanning, to image these non-destructively and in great detail."

Professor Susan Evans (UCL), who first described and named Bellairsia 25 years ago from a few jaw and skull bones found in Oxfordshire, added, "It's amazing to have a complete specimen of this enticing little lizard and see where it fits in the evolutionary tree. We are learning more about early lizard anatomy thanks to fossils like Bellairsia. Angus Bellairs, the lizard embryologist who gave Bellairsia its name, would have been overjoyed."

Dr. Mateusz Taanda (University of Warsaw) led the study, which included researchers from the Earth Sciences Department at the University of Oxford, the Oxford University Museum of Natural History, UCL (University College London), the European Synchrotron Radiation Facility, the Natural History Museum in London, and the National Museums of Scotland.