According to Boston College researchers, air pollution caused 2,780 deaths, illnesses, and IQ loss in children in Massachusetts in 2019.

Using public data and open-source software, the research methodology provides a model that can be replicated in other states. 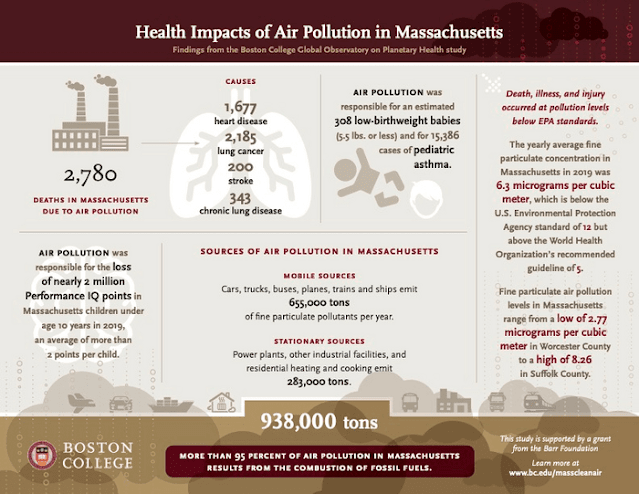 Chestnut Hill, Massachusetts (7/17/2022) - According to a new study by researchers at Boston College's Global Observatory on Planetary Health, air pollution remains a silent killer in Massachusetts, responsible for an estimated 2,780 deaths per year and measurable cognitive loss in Bay State children exposed to fine particulate pollutants in the air they breathe.

According to the report, published today in the journal Environmental Health, the Boston College team estimates the cumulative impact on childhood cognitive development in Massachusetts in 2019 was a loss of nearly 2 million Performance IQ points or more than 2 IQ points for the average child. According to the team, IQ loss impairs children's school performance and lowers graduation rates.

"We're talking about the effects of air pollution at a very local level in Massachusetts, not just statewide," said lead author and Observatory director Boston College Professor of Biology Philip J. Landrigan, MD. "This report allows people in every city and town to see for themselves the quality of the air they and their families are breathing, as well as the dangerous health consequences of air pollution for both adults and children."

"All of these health effects occurred at pollution levels that were lower than current EPA standards," Landrigan said.

Because there aren't enough air quality monitoring stations in the state, town-by-town air pollution data is rarely available. Using available data and computer modeling, the team determined levels for all cities and towns.

While Massachusetts meets federal clean air guidelines, and air pollution in the United States has decreased by 70% since the passage of the Clean Air Act in the 1970s, when Landrigan and other scientists successfully lobbied for the removal of lead from gasoline, unclean air at current levels still poses health risks to both healthy people and those suffering from other ailments or illnesses.

"We don't have the level of air pollution that you see in China or India, and because it's mostly invisible today, people forget about it and we become complacent," Landrigan explained. "We hope to break through this apathy and raise awareness." Every year, air pollution kills 2,780 people in Massachusetts, accounting for nearly 5% of all deaths in the state. We can eliminate air pollution. We know what steps must be taken to reduce fatalities and their consequences for our children and grandchildren. Citizens throughout the Commonwealth must now urge our elected officials to take the necessary steps."

The combustion of fossil fuels is responsible for more than 95 percent of air pollution in Massachusetts. In 2017, the most recent year for which data were available, cars, trucks, buses, planes, trains, and ships produced two-thirds of pollutant emissions - 655,000 tons. 283,000 tons were produced by power plants, industrial facilities, and home heating and cooking. These sources emitted a total of 938,000 tons of pollutants.
The combustion of fossil fuels is also a major source of carbon dioxide and other greenhouse gases that contribute to global climate change, which the researchers believe should further incentivize Massachusetts to reduce air pollution and greenhouse gas emissions by transitioning to cleaner fuels.
"Air pollution harms our environment and young people, and these burdens disproportionately affect environmental justice communities," said Kathryn Wright, Senior Program Officer for Clean Energy at the Barr Foundation. "Significant action on climate change requires us to address air pollution from transportation and our energy system, as well as its many negative consequences, as soon as possible."
Adults have been linked to a variety of non-communicable diseases caused by fine particulate air pollution, including cardiovascular disease, stroke, lung cancer, and diabetes. Air pollution increases the risk of premature birth, low birth weight, stillbirth, impaired lung development, and asthma in infants and children.
"All of these negative health effects occur at fine particulate matter pollution levels that are lower than the U.S. Environmental Protection Agency's current annual standard of 12 micrograms per cubic meter," Landrigan said. "As a result, even in a state like Massachusetts, which registered below that standard, air pollution is a formidable public health threat that must be addressed urgently."
The following solutions are suggested in the report:
JOURNAL Environmental Health DOI 10.1186/s12940-022-00879-3
Edit This Article
Tags Environment News