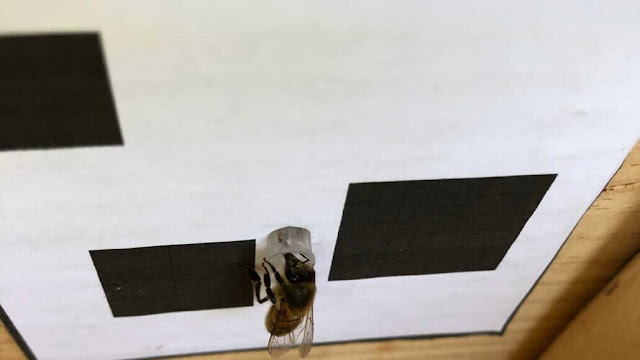 A new study found that honeybees trained to recognize a specific number fly left when given two side-by-side options of a smaller number and right when given larger numbers. Researchers report on October 17 in the Proceedings of the National Academy of Sciences that honeybees have a "mental number line" with biological roots.

While some scientists agree that the study makes a compelling case for a mental number line in honeybees, others argue that the new work is an oversimplification of complex human behavior.

Many humans have a mental number line that often puts smaller numbers on the left and bigger numbers on the right — if asked to organize several bunches of grapes by size, you’d likely line them up by an increasing number of grapes from left to right. This association's birth or learning has long been debated.

Honeybees can count and understand zero (SN: 6/7/18). “When you realize all these facts, an obvious question [is whether honeybees have] the so-called mental number line,” says Martin Giurfa, a biologist at the Université Paul Sabatier in Toulouse, France. Working from home during COVID-19 lockdowns, Giurfa tested 134 honeybees (Apis mellifera) on their number-ordering abilities using a design developed with researchers who had done similar experiments with chicks and human babies (SN: 1/29/15).

First, Giurfa had to teach his bee pupils to recognize numbers. He lured honeybees into a wine box-turned-testing chamber with sugar water. He hung a panel with one, three, or five symbols on the back of the box and fed each bee sugar water to teach them to associate the number with food. He ensured the bees learned the number, not shapes or arrangements, by changing the symbols between visits.

After 30 trips to the box, Giurfa removed the training panel and set up two mirror-image panels on the left and right walls of the box for a test. These new panels had fewer, the same, or more symbols than the training panel.

Left or right? Giurfa says, "Your reference number matters." 72 percent of bees trained on "one" flew to the "three" panel to the right, but 73 percent of those trained on "five" went to the left. “That’s exactly the concept of the mental number line,” Giurfa says. “You align numbers based on your reference.” If the test and training numbers were the same, the bees did not prefer left or right.

Felicity Muth, a biologist at the University of Texas at Austin who was not involved in the study, says these experiments "make a very compelling case" for honeybee mental number lines. “They have several controls that really rule out any alternative explanations I can think of.”

These findings suggest that animals have mental number lines, according to Giurfa. Not everyone agrees.

Rafael Núñez, a cognitive scientist at the University of California, San Diego, warns against oversimplifying complex human concepts like "number line," which distort the phenomena that make them possible.

Núñez, who co-authored an article critical of the chick study, thinks animal research should explain why bees and chicks have inborn mental number lines but some human groups, like those he's studied in Papua New Guinea, don't. Giurfa acknowledges that culture plays a role in explaining why not every adult naturally orders numbers from left to right but feels that the proof is there for a biological underpinning (SN: 8/23/21).

This study suggests that asymmetrical brains may explain why bees, chicks, and babies have the same left-to-right number ordering. All three have left- and right-brain processing. “It might be inherent to these lateralized brain systems,” Giurfa says.

If widespread, a number-organizing system would show how similar animal minds are to ours. Giurfa warns against underestimating animals' cognitive abilities. “We are different from animals, but we are very similar in others,” he says. Denying this similarity will not help us understand ourselves.”