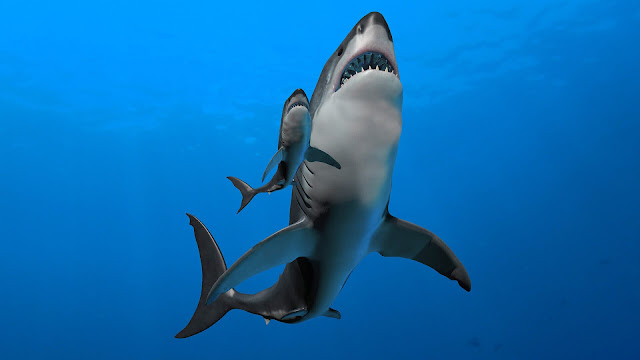 Megatooth sharks, including megalodon, appear to have held the highest position in marine predator food webs ever held by a predator.

Megalodon and other megatooth sharks may have eaten other predators as well as each other, putting them in an unusually high position in the food chain.

"Megatooth sharks were most likely at a higher trophic level than any other marine predator," says Princeton University's Zixuan Rao.

This means that when a predator consumes an animal, the flesh it consumes contains more nitrogen-15. This more enriched nitrogen-15 signal is incorporated into the predator's flesh and becomes even more enriched as the predator preferentially excretes nitrogen-14. If the first predator is eaten, the second predator will incorporate an even more potent nitrogen-15 signal into its tissues. Because this process continues up food chains, researchers can use the nitrogen-15/nitrogen-14 ratio in fossils to estimate how far up the food chain an ancient animal would have been.

Rao and her colleagues investigated nitrogen ratios in enamel, a tooth material extracted from five extinct megatooth shark species. The size of these species ranged from the 3.5-meter-long Otodus auriculatus to the 15-meter-long Otodus megalodon – known simply as megalodon to many people.

The nitrogen isotope ratio was also measured in samples from existing marine mammals such as dolphins, seals, walruses, and polar bears, as well as modern sharks such as the great white.

Megatooth sharks had the highest nitrogen ratios, higher than any other living marine predator. "Until this project, we had never seen nitrogen ratio values this high." "We were expecting high values, but not this high," Rao says.

The findings indicate that not only were megatooth sharks at the top of food webs, but they also ate other predators near the top of the food web.

The findings also suggested that megatooth sharks began eating other predators relatively early in their evolution when they were relatively small animals measuring about 3.5 meters in length.

"This is really fascinating," Rao says. "It suggests that the enormous size of the largest megatooth sharks was not required for them to reach the top of the food web."

"Previous research indicated that megalodon held a higher position in the food web than the great white shark." "With a much larger sample size and cutting-edge methodologies, this study better supports this hypothesis," says Catalina Pimiento Hernandez of Swansea University in the United Kingdom.