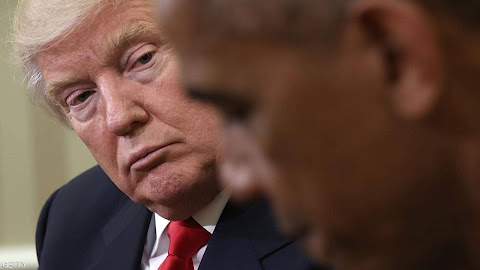 In a veiled criticism that came at a difficult time, former US President Barack Obama, on Tuesday, made a veiled criticism of his successor, Donald Trump, saying that the Republican team "denied the warnings" of the COVID-19 pandemic while warning against ignoring the consequences of climate change.

Obama turned to social media for his criticism.

"We have all seen with so much fear the consequences of those who have denied warnings of a pandemic," Obama wrote on Twitter.
"We cannot afford more of the consequences of denying climate change. We must all, especially young people, demand our government for the best at all levels, and elections this fall," he added.
On Tuesday, Trump warned that the United States would go through two "very, very painful" weeks in the fight against the emerging coronavirus, which continues to claim increasing numbers of victims in his country and the world at large.
"It will be very painful, we will go through two very, very painful weeks," Trump said during his daily White House press conference on developments in the fight against the COVID-19 epidemic.
The US President described the COVID-19 pandemic as a "scourge", saying, "I want every American to be prepared for the difficult days ahead."
The Trump administration has faced harsh criticism for ignoring early warnings about the outbreak of the virus, especially after the number of deaths began to rise in countries such as China and Italy.
The United States has recorded more than 165,000 confirmed infections so far, the Coronavirus, and it is the world's leading country for the number of infected people, and the number of virus deaths has reached 3,400 people, more than the official death toll in China.
Edit This Article
Tags News science